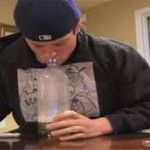 Here is the latest in alcohol abuse; smoking vapours of some alcoholic beverage has started to show up more and more in Toronto’s younger crowd as a way to get a buzz without the horrible feeling of alcohol in your system.

The media and other supporters will tell you that smoking alcohol does less damage than liquid alcohol drinking does to your body. When someone drinks alcohol the substance that creates an effect, the fermented yeast or other bacterial items, will cause damage to the intestines, stomach and liver. This action is countered by the body’s defence system to fight back the poisonous substance by using is natural proteins, vitamins and other poison fighting particles. The burning up of these nutrients to defend causes the effect known as being dizzy, giddy, tipsy, and overall silly. If too much is taken then the body reacts by puking (vomiting), a sign of alcohol poisoning.

With alcohol smoking or vaping, it is stated that these negative effects are eliminated but the “buzz” feeling is still effective. It also states one does not get drunk. Because alcohol smoking is a recent fad there is no research as to the true nature of such alcohol use. Even police are unaware of how this can affect one’s driving skills. One comment on alcohol smoking is the evaporating percentage which contributes to the inability to get drunk. Much of the alcohol evaporates and is therefore not inhaled.

In any case, the one big question that is not asked by the media, or researchers, is why in the hell does anyone need to smoke alcohol or drink it for that matter? Alcohol is a drug; it alters one state of mind and body. Those who feel the need to alter their minds or bodies have underlying, unresolved personal issues to address. Most people drink alcohol because of their inability to deal with some life situations. It could be a mother unable to cope with the 3 kids growing up, a husband who yells all the time or a wife who is unable to perform sexually. Or even a teenage boy whose father thought bringing up a son what like cattle wrangling. Each has some life situation with no immediate solution.

Alcohol in small quantity tends to act like a sedative, it takes the edge off, soon more edging is required, a bit more and it will numb the unwanted feeling, it’s like an anesthetic, soon more is required just to wake up in the morning because the body has now adapted to the poisonous effects and just to function requires a considerable amount.

The answer to whether smoking alcohol is still alcohol abuse; is yes it is.