The Happy Sadness
of the Holiday Season

Woke up one morning and it was a beautiful December morning with the sun shining and a light flurry. From the window I could see it was going to be a good day. I got ready for work and step out into the brisk wintry day, I was happy that I took the time to pick up a nice gift for the office party. In fact I was sure that the co-worker I had chosen for the gift exchange would be very pleased to have this gift.

As I entered the office you could feel the excitement in the room and everyone was dress up for this evening’s event. As the day wore on the buzz got more intense, you could see that all the employees were just as excited as I was to get together and just have a good time. When 5 o’clock arrived people began to exit and head out to the rental hall some blocks away. I left with some colleagues and we drove there. The festivities included a cocktail and announcement from the CEO, a three course meal, gift exchange and dancing.

I had my first drink at 5:30 and this was fine, during supper we shared a bottle of wine at our table of four where I shared two more glasses. Then someone ordered a second bottle and decided I would only have one small glass of wine with dessert. Thinking back on that evening, I guess this is the one I should not have had. When the meal was over I felt tipsy from the three glasses of alcohol I had drank but I went and picked up a beer while the gift exchange was happening. It was clear that many others had a few drinks also anyone could easily observe odd behavior in people, the way they spoke, the comments made, the hidden remarks, the snickers, etc. I never considered myself to be a big drinker or having a problem with alcohol. But for some reason I felt the need to have another beer, then a vodka, then shooters than more shooters. 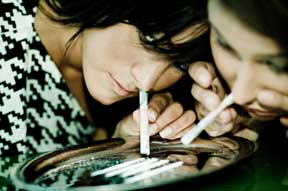 By ten o’clock I was pretty drunk and so was many of the co-workers. Then I was approached by a fellow who I had seen around but had no formal contact with. He smiled and invited me
to a secluded area of the hall, we sat and laughed and said silly things he then pulled out a small baggy with white powder in it. I was shocked at first but being drunk my initial reaction quickly disappeared. He invited me to sniff some cocaine with him, I did. Don’t know why but I did. It was not long before I was sniffing more and more. At close to midnight most of the party staff had left and myself and my new found buddy decided to leave, he invited me    to another party which I agreed to as long as there was more coke there or any other substance.

Unfortunately for me that night was the end of my happy holiday seasons for the next five years. The cocaine became the only important thing in my life, I lost my job, my apartment and all my belongings. I am now selling my body and soul for a few lines of cocaine. I am thin and have Hepatitis-C, was pregnant but lost that child two years ago. Today it’s once again the fantastic Xmas season and I can’t help but be reminded of that fatal evening when I should have said no to the one drink too many that sent me on an adventure of losing all that was important. I have an appointment with an addiction counselor next week, maybe this time it will be different and I will have an actual chance to change my life.

The only thing I can say to anyone at a party with alcohol and drugs is before you decide to take another cheering drink or a line of some cocaine or just joint of pot. Stop and look, look at the people around you, look at your life as it exist and ask yourself this: am I ready to throw everything I know, have and love away for a brief momentary sensation of bliss?

This has been my Happy Sadness of the holiday season. I know I will be better so don’t be sad for me be effective for the person you love and care about who is struggling with addiction.