If you do not know what a Meth Amphetamine lab looks like maybe this may give you a bit of an idea. Picture a beautiful spring morning you walk outside to get a good whiff of fresh spring air and you receive a pungent dose of 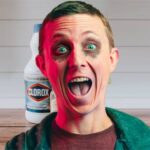 ammonia instead. You look over the neighbour’s fence and notice an odd heatwave from the garage door. Lying by the roadside are empty canisters of Drano, javex, ajax, broken car batteries and piles of empty over-the-counter cold medicines.

You question your neighbour’s education and know he is not a certified chemist yet he sometimes does look like a “mad scientist” with charcoal soot around the eyes and an over-exaggerated grin of excitement.

Major Cause of Death

Though the image may be a bit ridiculous it is nonetheless true and a major cause of death across Canada. Meth labs like the one just outside of Edmonton are a greater danger to surrounding homes and people than we think. All these homemade laboratories are stacked with dangerous and explosive chemicals. If you knew exactly what was put in some of these homemade drugs called Meth Amphetamine you would look at this person as a suicidal maniac.

The number of toxic poisons that are used to fabricate Meth Amphetamine would be like drinking rocket fuel. A person who is addicted to Meth Amphetamine has normally tried the other drugs but didn’t get the desired effect, which is to render numb the unwanted feeling, sensation, emotional trauma or whatever it is that this person wants to numb.

The drug, Meth Amphetamine will stamp out that unwanted feeling but it also stamps out all other memories and feelings that make you human. Meth Amphetamine turns people into zombies, literally.

It is another success for the Edmonton drug task force and local law enforcement for closing down another dangerous Meth Amphetamine lab. As for the person running the lab, criminal? Yes, dangerous? Yes, guilty of a crime? Maybe the only crime is being a drug addict in need of drug addiction treatment.

Incarcerate by all means but give him some form of drug addiction treatment program also. What good is a prison if it doesn’t help beat the addiction? Remember we are rarely born with a joint in our mouth, a straw in our noses or a mug of beer in our crib. Addiction was brought about and is now out of control.

If you know of a methamphetamine lab in your neighbourhood please call the local authorities and get it dealt with, for your safety and the safety of those around you.